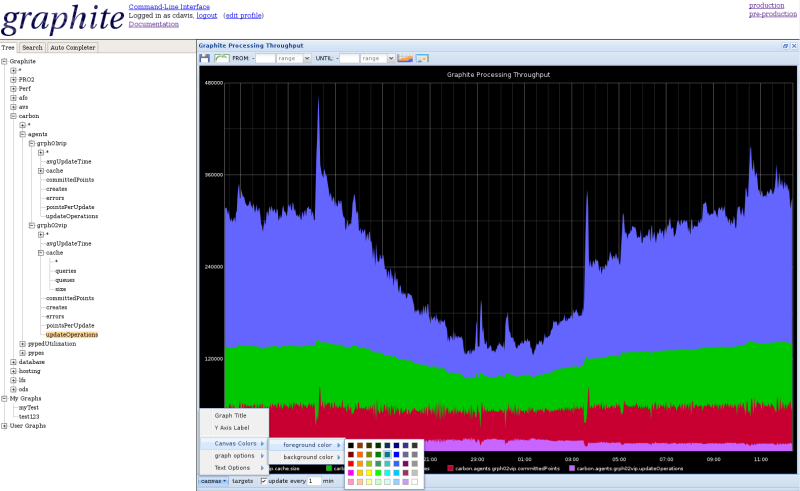 There are many posts in the Internet about what is Graphite and how to work with it. In this post I want to talk about why any professional engineer (developer) have to work with Graphite.

During my Graphite implementation sessions with engineers in eToro I felt difficulty to explain developers what is Graphite and why they want to use it instead (or in addition to) other monitoring tools.

We tried variety of different logging and monitoring tools in eToro in the last year. We are using log4net to save our logs in files. We used to work with LogEntries to store our logs in cloud, but we decided that it doesn’t precisely fit our needs and now we almost finished the migration to Splunk. Splunk knows to do logs analysis better in addition to aggregations, correlations and dashboards.

We are also using New Relic which is a great SaaS tool. You just need to install an agent on your web server and you get a great visibility on your application performance including database and external dependencies. But we faced few problems with it. Most of our applications are written in .NET and some types of applications like WCF, Web API or ServiceStack were not well supported by New Relic (could be that they added a better support by now) and returned wrong numbers if at all. In addition we found in some unknown cases that New Relic agent installed on IIS caused random application pool restarts.

And now before explaining why Graphite, I have to explain breifly about what is Graphite. Very rughly - Graphite is a metrics collector. You can report withing the code of your application counts, timers and gauges. You can count how many times some method in your application was called or the time it took to execute this method. You give your metric a name separated by dots and Graphite knows to break it and show it as a tree in its UI (see the screenshot above).

For example, you can count successful user sign ups by adding the following line in your code where you are sure that the sign up completed:

By the way, timers includes counters as well. You don’t have to count the call again if you time it.

StatsD is a client which received the metrics by UDP, process it, applies some math function and stores it in Graphite. (this in not 100% correct, I wrote it as I wrote in favor of explanation simplicity)

So now, when you have some high level clue about what you can do with Graphite, we will talk why we (as developers) have to use Graphite.

Ofcourse you can report counters and timers to your logs and then ask Splunk to collect the logs, process them and build some nice dashboards, but why? If you have like millions of lets say impressions or click you need to count? It make no sense to flood your logs with data which you want to see as graph. Logs are meant to keep your errors and debug info if required, keep them as clean as possible, otherwise it will be hard to analyse.

With Graphite you should measure every method in your application and all your external dependencies like database calls, cache hit/miss, messaging. Its up to you and your application business logic.

Another code example where we created a custom .NET [GraphiteTiming] attribute using PostSharp library in order to do quick metrics instumentation of each method in a class (if you set the attribute on class level) to measure time (and number of executions) in addition to counting the exceptions:

If you didn’t try Graphite yet, you should definitely do! It gives you “eyes” and power to see what is happening with your application in real time.

Like some wise man said, life of a good developer splits to two parts - before Graphite and after Graphite. ;)

Must read references to Graphite information: